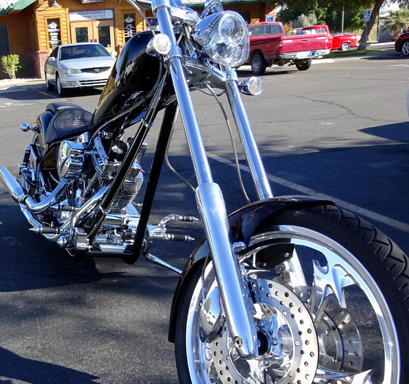 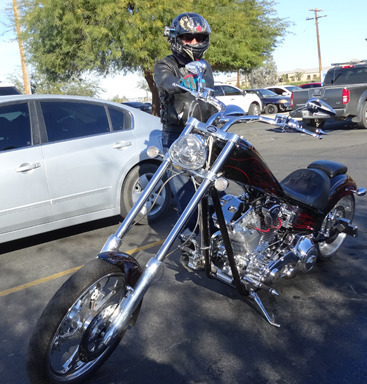 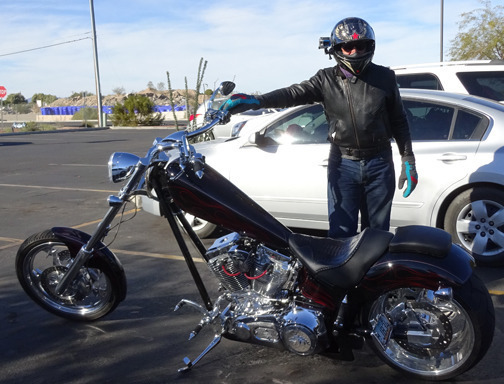 2007 American IronHorse Texas Chopper , 2007 Texas Chopper for Sale with just 6,450 miles! I rode this bike from Chandler, Arizona back to San Diego. Approximately 350 miles in one day. Except for the cold weather in January, it was a great ride! With stops for gas and lunch. It took about nine hours. What was really important was that I had no mechanical issues with the bike during the ride, and after the ride when it was parked overnight, there was not one drop of oil on the ground the next day! Both the front and rear tires have less than a season on them and so are practically like new. It has a Custom seat with what looks like inlaid alligator. Also, the ignition wires have been upgraded to a red heavy duty set. Naturally, it has passenger pegs and an attached passenger seat pad. The American IronHorse Texas Chopper is very similar to the Big Dog K9. This fine factory built, high-power chopper motorcycle has a number of upgrades: newer tires. rear, adjustable air ride suspension, fully polished S&S engine . . Fully polished 111 S&S MOTOR, 6 SPEED TRANSMISSION WITH RIGHT SIDE DRIVE WHICH MAKES FOR PERFECT BALANCE AND VERY RIDER FRIENDLY CHOPPER. The down-side of this bike is that if you don't want to draw massive attention riding or even parked . . . THIS BIKE IS NOT FOR YOU! You would be much better off with a standard, non-descript, mass-produced Harley! This is truly a high-powered beauty! This bike has an OUTSTANDING Classic Chopper look and is an absolute blast to ride with the hidden soft-tail suspension. Over 9 long! Yes, this American IronHorse Texas Chopper offers the outstanding looks of a Hard-Tail Chopper, but rides like a dream with its Soft-Tail suspension. Plus, it has the very desirable rear adjustable air ride suspension! Current Arizona registration. Be sure to view the video of this bike. $15,990.00 OBO 6192865604