Jurassic Paddock: Racing With the Dinosaurs 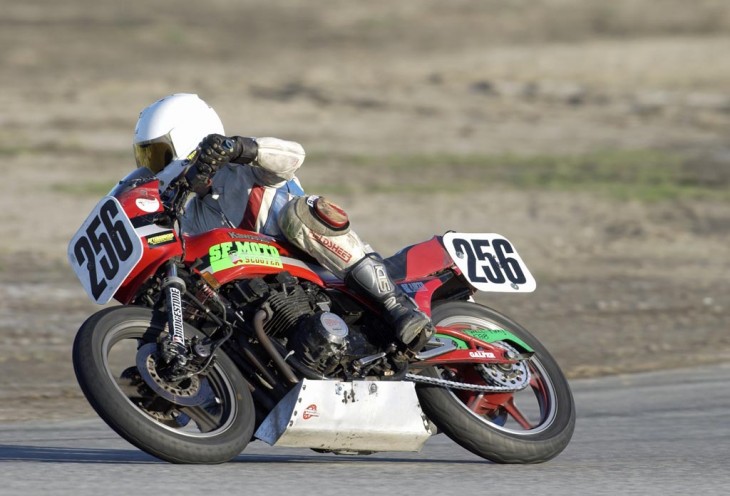 Mikey Leister campaigned his battered GpZ550 for local shop SF Moto. He would get on the podium in Super Dino and then finish mid-pack in 600 Superbike against bikes decades newer than his. Photo: Gary Rather

Northern California’s American Federation of Motorcyclists—the AFM—is over 50 years old, one of the oldest and largest in the country. Even in tough economic times, the grids are still full, filling Infineon Raceway and other tracks with the snarling sounds of the latest high-tech two-wheeled weaponry. The premier class, called Formula Pacific, is filled with top-level racers on brand-new 180-horsepower BMWs, Ducatis, Aprilias and Japanese Fours.

And then there are the classes for the rest of us, racers who are passionate about competition but can’t buy a new race bike every season. In addition to grids packed with lightweight bikes like the Kawasaki Ninja 250R and Suzuki SV650, since the early 1990s there’s been a class for racers with an old nail or two collecting dust in the back of their garages. MD readers, meet Formula Super Dinosaur.

The AFM Super Dinosaur class has had a few different faces throughout the years. The original rules limited the class to bikes made in 1985 or older, using Superbike spec rules (frame and engine case combination must be as-produced by the manufacturer) while limiting machines to DOT tires. It was created for bikes that were too old to be competitive in the modern displacement classes, yet not quite old enough for the vintage classes. Competitive machines in the early years included the RZ350 ridden by Enzo Ferrara and the BMW R90 piloted by Jove Shapiro.

Watch the action from on board novice racer Kevin Clark’s 1998 Ducati 916 as he chases Ed Haazar’s ancient (but formidably fast) Z1 around Infineon. The best action starts about five minutes in. Open the video to full screen for best effect. Take some Dramamine if you get car-sick.

The Superbike rules gave builders some freedom, resulting in the creation of some unique machines, like the FZ750 built by Paul Reynen, which featured an FZ750 frame and motor in conjunction with modern forks and wheels. His FZ750 won the Super Dinosaur championship four different times – in 1999, 2000, and 2001 with Reynen, and once again in 2002 with Reynen’s teammate Don Rudolfs.

Another interesting machine was the six-cylinder Honda CBX. Dubbed the “Tyrannosaurus X”, owned and built by Mike Dondellinger, the CBX was ridden by Denny Doherty and later Gary Jaehne, who went fast enough on the bike to qualify for Formula Pacific’s 1:57 cutoff at Sears Point.

Riders seemed happy with the class, as the 1985 class limit prevented the GSX-R750 (which wasn’t released in the USA until 1986) from entering. But with Superbike rules in effect, riders and teams were not limited to machines imported to the States, making the 1985 GSX-R750 (released in Canada, Europe, and Japan) eligible. Former 250 Production racer and current AFM Tech Inspector David Worthington found such a bike in Japan after many patient Internet searches. After successfully importing it and building it into a race bike, his 1985 GSX-R went on to win the Super Dinosaur championship three times: in 2003 with future AFM Top-10 plate holder Jon Bawden, in 2004 with Terry Cheney, and in 2005 with Worthington himself. 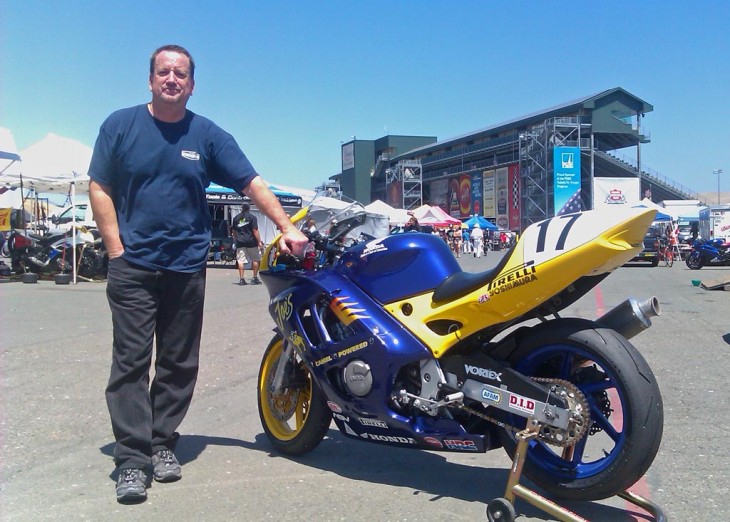 In 2004, the class rules were changed to allow motorcycles that were 17 years old or older to run, with the goal of increasing grid sizes of what seemed to be a dying class. In 2006, the rules changed once again, trimming that 17-year limit down to 12 years, in addition to allowing racing slicks. The rolling 12-year rule allowed several newer bikes to run and continues to be in effect to this day, resulting in a number of well-prepared machines from the mid ’90s to show up. Modern grids have seen GSX-R750s of the SRAD era, YZF750Rs, and F2, F3 and F4 versions of the CBR600. It also opened the door for lightweight, gray-market bikes to compete, as a few Yamaha FZR400s have shown up over the years.

The class is a contradiction of sorts, as the “Dinosaur” title suggests decrepit, fossil-like machines. A closer look at the last Infineon round revealed quite the opposite, with a well-prepared CBR600F4, an immaculate Smokin Joe’s CBR600F3, and a clean first-generation Suzuki SV650 all in contention for the top spots.

The future of the class is uncertain at this moment, as the rolling 12-year rule will soon allow machines like the ground-breaking 2000 GSX-R750 and the 2001 GSX-R1000 to be legal. Owners of older machines fear the loss of competitiveness, with even more fearing the loss of the ‘feel’ of the class. Some riders I spoke with believed a division of the class into different displacements would suffice; others thought a division into different age ranges could be the answer. Another idea was the thought of removing the ‘rolling’ age limit all together, placing a cap on the class sometime in the late 90s to prevent the newer GSX-Rs from entering. The present crop of riders both love their machines and enjoy the close yet friendly competition—as long as those are preserved, the dinosaurs are sure to live on. 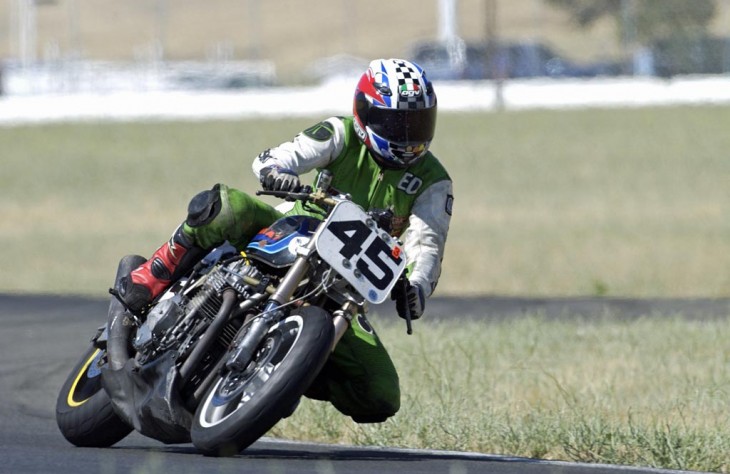 Ed Hazaar wrestles his mid-'70s Kawasaki Z1 through the turns. Photo: Gary Rather